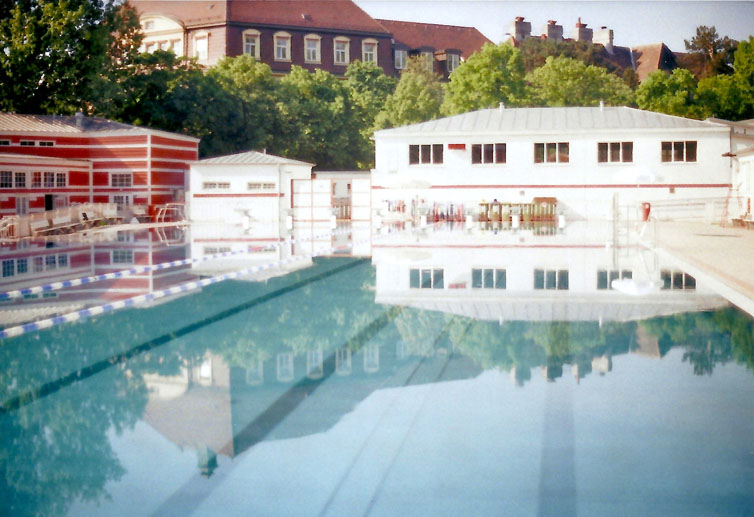 THE HISTORY OF RADIOKOJE
Kongressbad, a place to bathe in water, sunlight and air, is certainly familiar with change, having endured almost one hundred years of unsteady European history since its completion in 1928. Whereas the “roaring twenties” focused on the recreational needs of workers in the surrounding districts Ottakring and Hernals (back then, productive industrial and business locations), the 1930s established the public pool as a meeting point for music lovers. Kongressbad was an essential facility to access music, as it played the newest Jazz, Swing and Rock’n’Roll records in its own radio station “Radiokoje”. Especially during the NS regime, when enjoying this kind of music in public was strictly forbidden, the broadcasting and dance events expressed a form of resistance. After 1945, “Radiokoje” was continued by the allies.

The emancipatory function of the pool as a public and cultural location became less and less important during the 1960s, when newly gained wealth and affordable motorization in post-war Vienna enabled residents to spend their free time away from home. Collective experiences in music, sports and cinema is still decreasing with the spreading of new technologies and home entertainment. Already by 1950, the popular radio broadcasts had slowly started to fade out, finally ceasing in the 1980s when renovations demolished the former radio cabin—a small building next to the old diving platform. Hardly any architectural remains tell the story of the radio’s existence. Yet, when asked, several older swimmers remember dancing barefoot by the pool and will tell you the wildest love stories you’ve ever heard!

CZIRP CZIRP @ IGNM
Since 2019, czirp czirp has been collaborating with the International Society for Contemporary Music (IGNM), which has already allowed for a range of exciting performances to take place in the public pool. We are now looking forward to the 2020 and 2021 editions, as we set forth toward updating the pool’s cultural program with concerts, sound performances and dancing events. The chirping, humming and sounding of Vienna’s contemporary and experimental electronic music scene will be accessible for a broad audience to dive in.