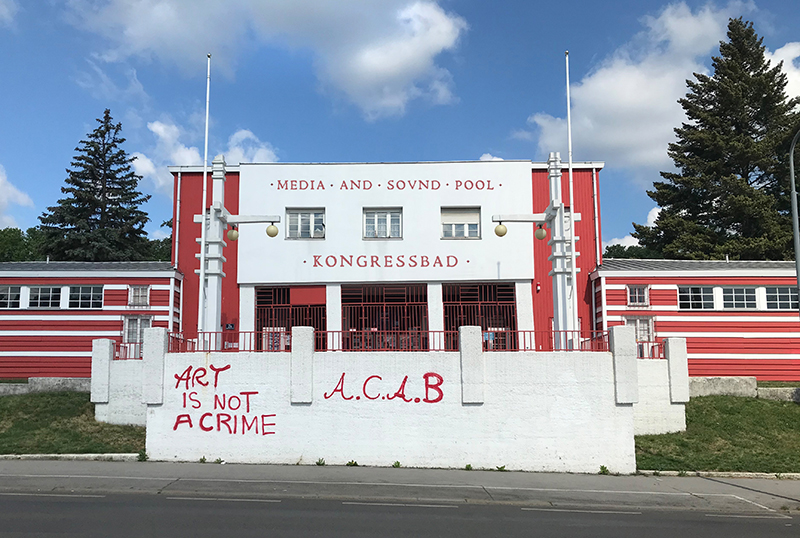 Funded by the Federal Ministry of Arts, Culture, Public Service and Sports (BMKÖS) and the City of Vienna within the joint CALL “Art and Culture in Digital Space“.

The MEDIA AND SOUND POOL @kongreßbad is to become an archive for contemporary music and sound art that can be experienced in the hybrid space of an augmented reality (AR). As part of the annual event series “Club Radiokoje”, czirp czirp has been inviting artists* since 2018 to engage with the medium of water as well as the special historical and structural conditions in the open-air swimming pool Kongreßbad—this architectural jewel of Vienna.

Together with the Artificial Museum (aka The System Collective around Daniela Weiss and Jascha Ehrenreich), we are now expanding our digital work with this new project by inviting 5 artists* to develop AR sound works in public space. A browser-based map of the swimming pool area will host past and future site-specific works as a virtual archive, and interweave them with the history of the bath.

The historic bath, built in 1928, is celebrating its 100th anniversary in a few years. Between now and then, we are expanding on its former function as a radio station, its history as a cultural meeting place, and as a site of resistance against the Nazi regime.

The System Collective will provide the digital infrastructure and virtual mapping of the AR sound works. They will offer a platform for dissemination and introduce the selected artists* to web-based animated media design.

With the MEDIA AND SOUND POOL @kongreßbad, we turn our attention to digitalization in art and immersive formats for sound art and musics (Spatial and Binaural Sound). As an additional interactive layer to real space, we offer a way to map ephemeral and site-specific events and keep them alive in a sensory way. We explore how new technologies influence artistic work, enriching its aesthetics, formats and languages. As a hybrid application in virtual and real space, we address new audiences in the analog as well as digital world.

In System Collective, we have found a partner who cares about digital education in the artistic field and supports us in this aspect. Our collaboration allows the artists* to acquire new skills with which they can continue to work in the future.

The Kongreßbad has experienced constant change since it was built in 1928, and has survived almost a century of European history. While the roaring twenties were guided by the recreational needs of the workers in the surrounding districts of Ottakring and Hernals—at that time productive industrial and business locations—the pool developed into a cultural meeting place for music lovers in the 1930s. During the Nazi era, music and dance events at the open-air pool continued to be an expression of resistance.