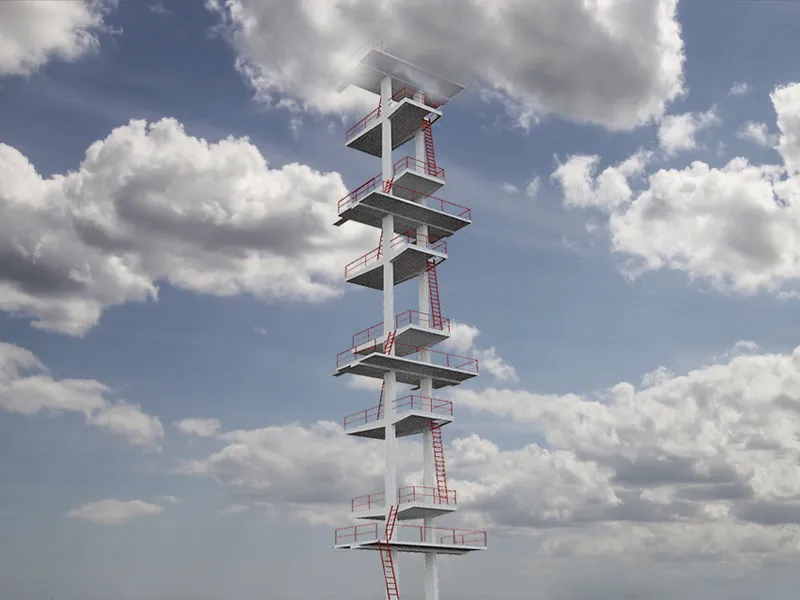 czirp czirp adds a virtual layer to Kongreßbad with the MEDIA AND SOUND POOL. We engage the site’s political and cultural history. AR artworks let diving towers grow into the air, and make machine networks sing.

Five media artists were invited to develop site-specific artworks that visually and sonically add to the pool ground. These can be viewed online and on site throughout summer as an augmented reality experience via artificialmuseum.com.

The 10-meter diving tower—a modern ferro-concrete construction—was a landmark at the Kongreßbad, built in 1928. In the course of the pool’s restructuring in 1981, the tower was demolished, and its remains were used to fill in the diving pit. The concrete rubble is still under the pool today. Adina Camhy reconstructed the diving tower and augmented it as a 100 m high functionless brutalist sculpture, which she embeds in a distorted acoustic backdrop of splashing noises, reminding us of its past life.

Line Finderup Jensen’s floating and water treading creature recites passages from US author Jack Halberstam’s Wild Things (2020). She thereby tunes into arcane language games that intertwine the water’s fluidity with what we imagine, feel, and think we know.

An animated and sounding tower of today’s trivial joys joins the vibrancy of the Kongreßbad with Hieronymus Bosch’s phantastic vision of the Garden of Earthly Delights. Milena’s interactive sculpture is less a celebration of nature’s abundance and human creativity, than an ironic comment on the excessive waste production connected to our lavish consumer culture.

A rattling radio set on the counter of the buffet takes us into the non-space of an ice box, an oven, a deep fryer and a pub. Reflecting her post-human ego in the crystalline and crumbly complex of radio landscapes, Lale Rodgarkia-Dara speculates about the remaining symptoms of covid-isolation.

While machine learning algorithms are usually treated as the new slaves of automated processing, as we expect them to learn and work 24/7, the art collective TE_R grants them some leisure and recreation at the Kongreßbad. This artificial intelligence (AI) is here to enjoy itself and blow off steam. Yes, the new automated working class does have a voice of its own—and sings to herself.